Most of the simplified Chinese characters used now are due to the government of the People’s Republic of China (PRC) in the 1950s and 1960s. However, the simplification of Chinese characters has its origins long before the formation of the PRC in 1949. When Chinese is written in cursive text, there is almost always some simplification of characters. This has been true since as early as the Qin Dynasty (221 – 206 BC).

The People’s Republic of China announced its first two lists of official simplified characters in 1956 and 1964. You can see from this newspaper that traditional characters were still being used when China was officially reborn as the PRC on the 1st April 1949. 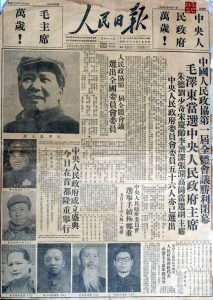 The People’s Republic of China, Singapore and Malaysia use simplified characters for almost everything. However, they are still quite rare in printed text produced in Hong Kong, Taiwan, Macau, and overseas Chinese communities. This is changing as China opens up to the world and there is more information exchange between the many Chinese communities. On the other hand, there is an increase in the use of tradition characters in mainland China on signs and in logos.

While the basic principle of the simplification of the traditional characters is to make them easier to remember and write, there is some confusion as some characters are not only simplified, but reborn as totally different characters. One example of this is the character used to mean “leaf”:

It is interesting to note that these two characters both exist in Japanese as well, but one has a totally unrelated meaning:

Another interesting exception to the idea that all simplified characters are simpler (fewer strokes) than their traditional counterparts is the character for “strong”: