Is there anything that isn’t copied in mainland China? I can’t think of anything right now. What can’t be copied is imitated to a degree somewhere between flattering and illegal, perhaps covering both ends of the spectrum.

This is a mobile phone I came across last time I was in China (last month). While at first glance it appears to be an iPhone complete with Apple’s logo, a closer inspection reveals that despite the apple mark, it is not an iPhone, but an iPhcne. 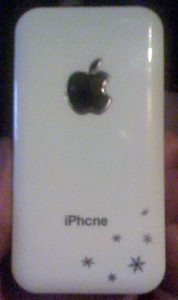 While it does have a touch panel display, it is a fold-in-two normal mobile phone, and function-wise doesn’t bear any resemblance to the real iPhone.

I used to look for various spurious items in China. My mission now is to find something that isn’t copied.