Cars but no parking

At the moment, you don’t need a parking spot in order to buy a car in China, and the number of cars is rapidly increasing. There are more and more cars on the road each month, yet there is nowhere to park them. As of January 2010 in Qingdao, there were approximately 1,500,000 registered cars, and that is 160,000 more than the previous year. In the same year, 200,000 or so people acquired a driving license. At the moment, the number of cars on the roads in Qingdao is increasing by 600 a day. That’s equivalent to 220,000 cars a year.

While the number of cars is increasing, the number of parking places is not. There are places along the side of the road, next to the pavement, carefully marked with white lines indicating where to park. However, these are just not sufficient for the number of cars that need a place to be parked, so the lines are ignored, and people park their cars on the pavement itself. The pavement, where people are supposed to walk, is now a parking lot.

This de facto parking lot is not free. It costs about 2 RMB for an hour. Of course, if you don’t need an official parking ticket (receipt), you can just give the man collecting the parking fees 1 RMB, and he will just put that in his pocket, avoiding the necessity to issue the bothersome ticket!

Since there are so many cars parked on the pavement, pedestrians are forced to walk in the road. The yellow bricks with Braille-like markings for the visually impaired are totally covered by parked cars rendering them meaningless.

Every time I come to Qingdao, I think, “Well, that’s about as many cars as there is room for”. However, there are always more the next time.

Where are they going to park them when the pavements are full . . . ?

These photos were taken from my office window, where the streets have quite a wide pavement. 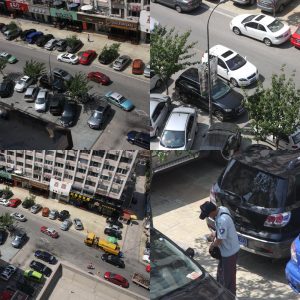 However, no matter how narrow the pavement is, the situation is the same.

Even when there is a policeman standing right under a “No parking” sign . . .