The saga started simply enough, but went on for three weeks, and isn’t really over yet. It may end up in the courts, but for now I just have to wait and see. Since it would be too long to write, let alone read, if I described all the details, I’ll just give you the outline of how I came to move the Chinese office. Not far, just to the room below!

On the 2nd August, I went into the office to find that water was flowing from the kitchen sink all the way to my desk—a distance of about 5 meters. The carpet (tiled) was soaked, and there was a lot of water on the kitchen floor. So, I immediately turned off the water at the stopcock, had a member of staff call the landlord, and we started to mop up the water, and take the carpet tiles outside to the veranda to let them dry.

The landlord came, quickly arranged for the burst pipe (below the sink) to be replaced, and then left us to finish cleaning up the mess. 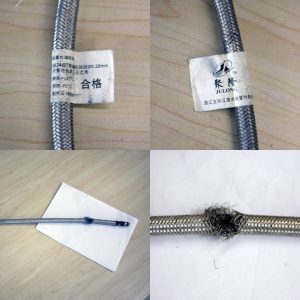 Two days later the carpet tiles were dry, so we bought some glue to put them back in place. Once the carpet was back to normal, my desk and computer were brought back to their original position and we thought that it was finally over.

We immediately called the landlord again, who came to see what we were describing. He just said that it would dry up if we waited a day or so, and that there wasn’t anything that could be done. Despite, our insistence that there had to be a lot of water below the floor, that the office felt very humid no matter how much we used the air conditioners, and that leaving the water would probably result in mold, the landlord just left saying that nothing needed to be done and that we should just wait.

The next day, there was more water in the other room, and the bottoms of all the exterior walls were damp. We again told the landlord that the water had to be removed or mold would be inevitable. He said that he’d think of a way to remove the water, and that we should do the same.

The landlord agreed that we could have a small hole opened in the wooden floorboards to see how much water there was, and to pump it out. So, I borrowed a pump from a friend, and we had somebody open a couple of 3 cm holes.

That is when we found out that there was 1 cm of water below the flooring. A rough calculation of 1 cm of water across 160 m2 of floor space told us that we had 1,600 liters (1.6 ton) of water below us. Even this news didn’t seem to bother the landlord who just said that we should pump out what water we could and then wait for the rest to evaporate.

So, we started pumping. After two days of pumping, and opening up a total of ten holes in the floor, we pumped out a total of over 700 liters of water, but it still left about 2 mm of water that the pump couldn’t remove. 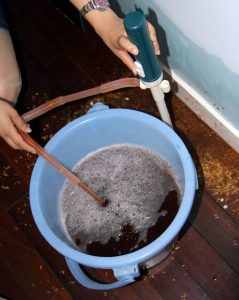 That evening, while I was in the office alone, a man from a real estate company came to the office. He asked if we had a problem with water, and explained that the apartment below us was vacant, but that water had leaked down to the ceiling. I went with him to see the apartment below. Water had poured into one room, and was beginning to show on the ceiling of another. He gave me his business card, and I told him that I’d have the landlord contact him.

By then, it was a week since the water pipe had burst, we had lost four days of work time, and—as we had expected—mold was beginning to form on the walls. Again the landlord came to look. He saw the mold, but said it would disappear in a few days after the water evaporated, and that there wasn’t anything else that could be done. He even brought us a 20 ml syringe saying that we could use that to remove the remaining water (approx. 300 liters).

A few days later, and the mold was thriving. We called the landlord and explained that if he couldn’t remove the water, we would have to look for another office as the mold would only get worse, and we didn’t believe the water would evaporate. He said he would look into how the flooring could be lifted, the water removed, and the flooring replaced, and said that that would take a day or so.

After another couple days of silence from the landlord, we called him again to get a final decision on what he was going to do about the problem. He suggested that we temporarily move everything down to the apartment below, he would have the flooring removed, everything dried, and the flooring repaired. We could then move back in. This, however, would take “about three weeks”. I made it very clear that there was no way I could have my company close down for three weeks, that moving everything downstairs and then moving it back again would be the same as moving twice, and that I would be left homeless for the three weeks (as I stay in a room in the same apartment when I’m in Qingdao). The landlord said that was the only option available.

While it was very clear that the landlord didn’t want us to move out, it was equally clear that lifting the floorboards was the only way to remove the water, and that meant we would have to find a new office. Since the mold was now expanding its territory day by day, just waiting for it to dry was simply not an option. 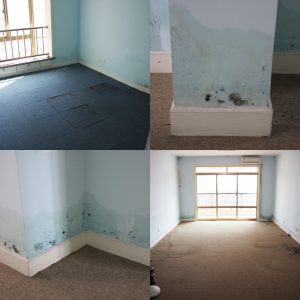 The office was moved on the Friday, the ceiling was repaired on the Saturday, we had somebody come to clean the new apartment on the Monday, and finished moving everything by that Monday evening.

Everything went smoothly, and all that was left was for us to end the contract with the landlord for the previous apartment. That basically meant returning the keys, etc. and having him return eight month’s rent minus a one month’s penalty for us terminating the contract midterm. That meant he owed us 37,498 RMB (520,000 JPY at a rate of 14 Yen).

However, when the landlord realized that we had already signed a new contract and would be moving out, he started claiming that we should pay for the flooring to be replaced. Even though it was his water pipe that had burst, his flooring, and he had constantly maintained that nothing needed to be done as it would all be OK after the water evaporated.

Two lawyers and the real estate company all agree that we have no responsibility to pay for the flooring and that he should return the remaining rent. He, however, seems upset that we moved out, especially to the room directly below, and refuses to return the rent.

The current situation is that we are still legally renting the previous apartment, so he cannot enter without our permission to fix it. The mold is getting worse day by day. He doesn’t have a key to the apartment as we installed a new lock for him ready to terminate the agreement.

He says he will just have a locksmith open the door for him and do what he wants as it is his apartment. Despite this being obviously illegal, he won’t back down, won’t even agree to pay half of the amount owed, and basically refuses to negotiate a settlement at all.

So, we are settled into the new office, which is far better than the former one, and have everything ready to either terminate the agreement, or for a court case if that becomes necessary.

Still, considering the time and expense involved in a court case, the only realistic option we had is to hold on to the keys and wait and see. If he does break in without our permission, we could call the police and/or take him to court, but nobody here really believes that either of those options would help improve the situation.

The strangest thing about this episode is how quickly the landlord’s attitude and behavior changed. He had been the ideal landlord for the two and a half years we were renting his apartment and then, as soon as we tried to end the contract, he turned into the landlord from hell.

Probably best to chalk it up to experience and get on with our work and lives in our new office. At least the address only changed from 903 to 803. Still, we still have a lot of paperwork to change the officially registered address with the various government agencies and banks, etc. 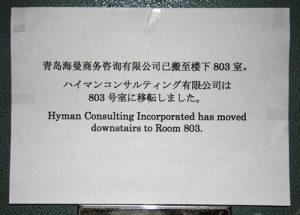