When I was setting up my office in China back in 2006, I had to go out and buy desks, chairs, computers, a refrigerator, etc., etc. I didn’t speak any Chinese at the time, so I was always accompanied with my first member of staff who would interpret for me. While I was expecting the price haggling, what I wasn’t prepared for was the question that we were always asked before the initial price was even quoted: “Do you need a receipt?” It soon became clear that things were cheaper without a receipt or, as the Chinese always explained it to me, things cost more if you wanted a receipt.

Having been bouncing back and forth between China and Japan for the past five years and now spending half my time in China, I am quite used to the idea, and it is indeed common practice in almost every industry.

Basically, there is a “sales tax” in China. That is, the person providing the goods or service pays a percentage of the sales price. This is not the same as the consumption tax in Japan or the VAT in Europe as it is not offset against the products or services you purchase. It is simply a cut of your gross sales.

So, if they don’t write an official receipt, they don’t pay the tax, and you get your purchase a little cheaper. Simple!

But, it gets complicated. I can’t speak for the whole of China—it’s a big place—but in Qingdao, where my Chinese company is based, it is common practice to give your client the official receipt with the invoice and for the client to transfer the money to your account a day or so later. There are concerns for both sides. Since once the seller has received the money, there is little incentive to write an official receipt as it will only mean they have to pay tax. This leaves the buyer without a receipt and unable to claim the purchase as a business expense. However, if the seller gives the buyer the receipt before receiving the money, then there is little that can be done if the buyer decides not to pay; after all, they already have both the product and a receipt for it.

One common way around this is for the person to come and collect the money and give the receipt in return, but this is not always possible even in the same town, let alone when doing business with somebody in another city. It is also problematic for a business like mine where most of our products are delivered via email.

Of course, an official receipt is only really of interest to people who need it to be able to claim the purchase as a business expense. Eating out in China is very common and the government has come up with a very effective way of getting the ordinary person to ask for a receipt in a restaurant even though they don’t really need one. They have introduced an instant scratch lottery at the top of receipts issued in eating and drinking establishments. You scratch away the gray panel at the top to see what you have won. While most of the receipts just say “Thank you”, you can win amounts ranging from 5 to 100 RMB. Due to this lottery receipt system, it is quite common to see two registers in restaurants: one for those who want receipts, and one for those who don’t.

Here is a lottery receipt from a restaurant that has a prize of 50 RMB. 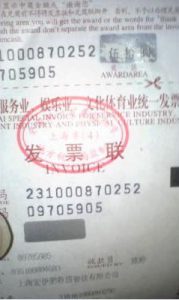