One country, one time zone

Despite China having approximately the same size and breadth as the USA, while the USA is split into four time zones, China has only one. When it is 10:00 am in New York (GMT -5), it is still only 7:00 am in Los Angeles (GMT -8).

The four time zones of the US can be seen on the map below. 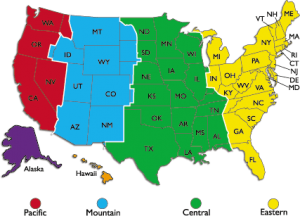 China, however, has only one time zone: GMT +8. This is the standard time zone for Beijing, but it is applied to all corners of the country.

In 1912, under the Republic of China, five time zones were established in China, as shown on the Map below. 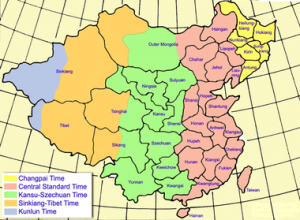 These were kept until 1949 when the Republic of China was reorganized into the People’s Republic of China (PRC) which is what we now commonly refer to as “China”, and now only uses the single time zone of GMT +8.

So, now China is the only country in the world to span at least four international time zones, but force its citizens throughout its regions to all use the same time. While this may have some advantages as seen from the seat of government in Beijing, it must lead to some dark mornings and bright evenings at the other end of the country. Of course, in the areas where agricultural is still the main industry, the local people often use their own local times, but the official time such as that used for airline flight schedules, etc. are still all based on the capital’s time.

Just another example of how China is different to other countries. Not better or worse, just different. Here is a map of the world’s time zones, with China marked in red. 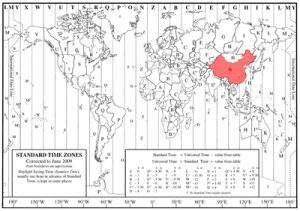