When we changed the company name from Hyman Translations to Hyman International, we adopted a new logo. As a consulting company focused on solving international problems, we chose a penguin as the logo because we believe that the first step in finding such solutions is to eliminate stereotypes from the equation.

While most birds do fly, penguins are one species that doesn’t. (The ostrich, emu, and kiwi are among other flightless birds.) Penguins don’t fly. They waddle. Yes, those waddling birds are about as clumsy as you can get when seen on TV waddling and staggering over the ice as if they were drunk. But, once they are in the water, they are fast and elegant.

As with anything else in life, no, it’s not just a matter of black and white. However, penguins are much more than just shades of grey. Many penguins have a wide range of colors from yellow to orange.

Most of the penguins we see on television are those in the Antarctic, and we often see them in freezing cold environments. However, there are 18 species of penguins and they are found in various locations throughout the southern hemisphere. Some of them are in Australia, some in South Africa, some on the Falkland Islands (off the coast of Argentina), and some are even on the Galapagos Islands on the Equator. 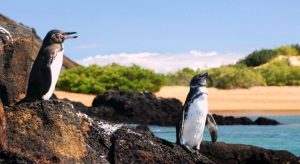 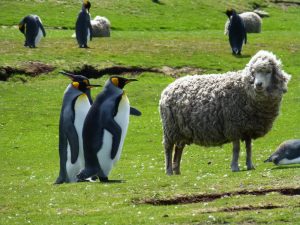 So, what is it about penguins that leaves so many people with these misconceptions? Many of the characteristics that are attributed to penguins are simply stereotypes.
We are surrounded by stereotypes every day.
Men are stronger than women.
Women look after the house and children.
Nationalities, religions, genders, races, . . . they all have stereotypical images attached to them and all are incorrect.

When I moved into university accommodation for the first year at university in the UK, there was a long list of rules which included “No pets such as dogs, cats, etc.”. When reading that, I wondered what animals would be included in “dogs, cats, etc.”. For example, a hedgehog, a snake, or even a penguin.
One evening, while talking about this with some friends, another friend came along, heard the end of the conversation, and jumped to the conclusion that I was planning on having a penguin as a pet while at university. For a while, everybody played along and let him believe it to be true.
From then, I began to read about penguins. While at university, I worked as a volunteer at a local youth center where I taught disadvantaged children a variety of things including camping, first aid, cooking and canoeing. I also worked as a counselor helping the children deal with their problems and worries. I often found myself using penguins in various examples when talking with the children.
After graduating university, I spent six months traveling. While in Nepal, I had a penguin embroidered on the back of my jacket, and continued to wear it long after arriving in Japan. And now, it’s the company logo. 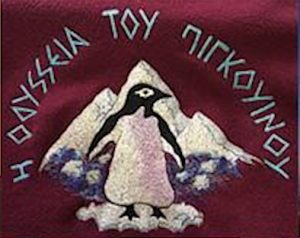