Seven spices, but only one reading

In Japanese there are two (main) ways to read the number “7”. It can be read as either “nana” or “shichi” depending on the context and with which other characters it is combined. The Japanese character for seven is “七”. However, when it is put together with the character “味”, which means taste, it is only ever pronounced as “shichi”. The spicy mix of at least seven spices with red pepper as the main ingredient is written as “七味” and read “shichimi”. This is actually an abbreviation of “七味唐辛子” which is read as “shichimi togarashi”.

No Japanese person, or anybody who had spent any real time living in Japan would make the mistake of reading this as “nanami” instead of “shichimi”.

But, here in Qingdao, China, I keep seeing bottles of “七味唐辛子” with “nanami togarashi” in English on the reverse side.

Possibly a fake product, but definitely a poor translation! 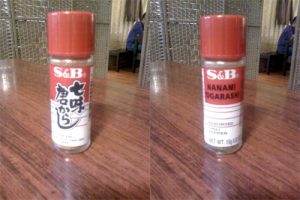